Added some more white, and fixed the jawline. Still a bit of work to go! 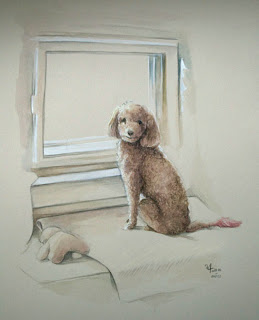 The paper is a bit better with gouache then watercolour. Takes light washes well. Not so good for heavy ones though.

Progress for Parisan buildings and sights.
On Ampersand Gessobord

Transfered images to Ampersand Gessobord. I really like the surface texture...smooth, but not as smooth as Ampersands Claybord. I'm going to be using Cobra Water-soluble oils, and will probably start on Wednesday.

I used 3 different methods of transferring the image.

1. Drawing directly on the panel with pencil, using a photo as reference.

3.The grid method. I made a to scale grid on a piece of tracing paper, which I laid over the original photo. I then drew in the grid on the Ampersand panel, and used it as a guide to lay in the image correctly. 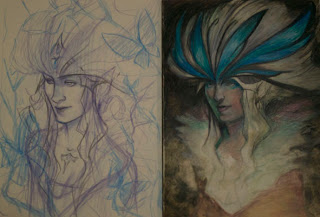 After transferring the image over with chalk (lost quite a bit in the transfer!), I started painting with the gouache. It seemed to sit on the top, which got frustrating. Every time I put down another stroke, it would pick up the one before. This lead to the paint caking, and occasionally being lifted away. Was annoying as this was mostly in the face area. After about an hour of annoyance, I sanded it down a bit, and went over it with Faber-Castell Polychromos Pencil crayons. They are oil based pencil crayons that are really rich and creamy, as well as extremely soft. The seemed to fix it a bit, but not that much.
I think I'm going to scrap this piece and redo it using Bombay Indian inks instead. A co-worker said that it looks amazing, so I'll try it. I'll redo the transfer as this one didn't go that well. I have 2 boards left...so there is some room for error and experimentation yet. 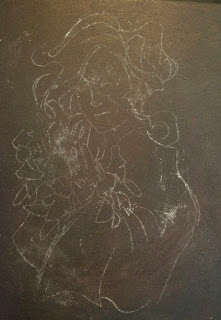 Hoping to also start this tomorrow. I have my new Sta-Wet palette ready to go (best invention since acrylics ><), and am extremely exited to start painting. I got really into acrylics a few months back and was trying to avoid oils....but I love oils and acrylics to much to give either more time over the other.
The Sta-wet palette I purchased (mostly for this painting session), was to try to keep the paint wet longer so I could do a several sitting painting....so to stretch it in the same way as oils. I think it might actually work a bit better then the water-mixable, as they dry within a few days of being out in the open, while the Sta-wet palette is still wet after days (closed of course!).
I may update again in the next few days. Will probably have some better shots to as I have a better camera which is over 2mps now -_-!