After revisiting Art renewal center , I decided to do a few oil studies using some of there high res images so I could test out my water-mixable oils with different solvents. I did this hoping to learn a few more techniques and just to get back to "painting what you see, not what you think you see." Painting from classical painting is a great way to learn so I've heard, and thus wanted to give it a shot.

I have a lot of work to go on this one. I realized after making this comparison shot, that the proportions are majorly off. I did fix some areas by my second sitting, but the paint was still wet. Not only are the colours off (the original is more pink, not blue), but the safflower oil I was using dulled the paint down considerably. It didnt help I was using the paint on a clear-primed linen canvas, with safflower oil (meant for paler colours)for glazing and laying in the underpainting, which went on much thinner the expected. What should have happened is that I should have done a flat colour (without any safflower oil) for the background, and then go in with the figure. Working this way, might have meant better colours earlier on. Also, this would have meant that the painting would be less shiny at this stage, as safflower oil goes on and drys a bit glossy. The shine makes it difficult to apply colour under certain lighting, which might have also contributed to the more blue vs pink tones.

>>>Next step: Glazing with some pink to get rid of the blue tones....magenta might work.

Still working on it. Fixed a few areas around the chin...made her look a bit thinner. Her face looks like its in proportion now!


NEW PROJECT: Painting on Ampersand Hardbord and Masonite...which is better (and the difference)?

So, being a fan of higher quality materials, I decided to tryout Ampersand Hardbord. Ampersand hardbord is an archival sort of Masonite (also known as hardboard, but to avoid confusion will be referred to as Masonite), which is supposed to be better then the cheaper hardboard's on the market. Masonite (according to ampersand) apparently an old brand name, with its common name being hardboard. Ampersand Hardbord is apparently formed in such a way, that it resists warping, can be framed without glass (the thinnest panels they sell) and can support both oil and acrylic grounds.

My first thought was that it looked a lot nicer then the good old Masonite I used in high-school, but never really thought past how long it would last, not that you really care about that when your 18! Even recently, after watching some tutorials by Donato Giancola, I didn't really think of its archival qualities, and he uses the stuff to do full illustrations on. He does however mount the image to the piece of Masonite hes working on, with matte medium, which probably acts as a barrier similar to the sizing ( a co-worker said that matte or gloss mediums can act as sizing agents as well). Apparently though, if painting on just a gesso'd surface on Masonite, the paint could disintegrate and change colour over time. 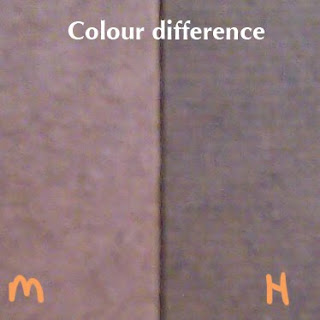 So, after going to the ampersand website, I learnt that to make their hardbords completely archival (there could still be issues if not properly treated). You first need to apply a sizing agent to the board to help prevent warping as well as seal the wood. I decided to do this to both the Ampersand Hardbord as well as regular old Masonite. Ampersand Hardboard is labeled H and Masonite is labelled M.

The site recommended using Golden Gac-100 or Gamblin pva size. So, I took the advice of the website and bought Golden Gac-100, and followed the directions on the site (add 2 coats, and leave to set for 1-3 days).I decided to go with the Golden Gac-100 mostly because I'm a fan of their mediums, and as I'm paying for archival boards, might as well as follow the directions to get the most out of them. 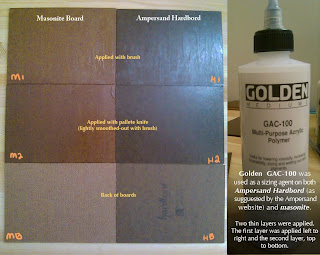 After the sizing, I did notice that there was some more warping on the regular Masonite board. I used to treat this by painting a giant X with Gesso (warping usually happened while gessoed side was drying) and it usually helped to reverse it.

I will say, I do like the colour of the Ampersand board more. The texture is also smoother. The back doesn't even have the rough, chip board texture of the regular Masonite boards. Generally, it just looks better. It also costs more then Masonite, but not as much as canvas. The major point, is that its archival, so long as you sized it and applied the ground right. Ampersand claims that the process which its produced is different from typical Masonite, to insure that it does stand the test of time.

After 3days of letting the sizing sink into the boards, I gessoed them with Liquitex Clear Gesso.
I started with one horizontal layer, and once dried, a second in random directions in order to create texture.I only did this to one board of each, and gessoed the others normally.

I did however, forget to water down the gesso for the first coat, as suggested by Ampersand. Oh well...it seems to be sticking fine now. Hopefully it won't effect the outcome.

PROGRESS: Aria and "Finding of Moses"
Posted by Meldt at 12:00 AM