Pamcake Drawing Dump
Newest are towards the top :)! 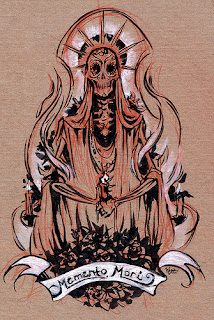 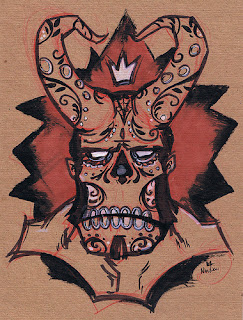 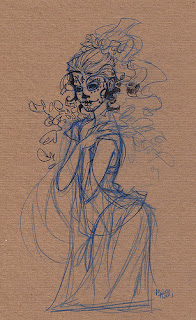 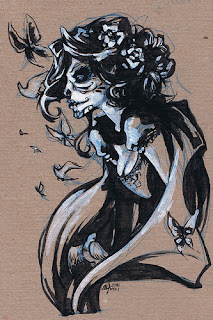 Day of the Dead related drawings from drawing group. 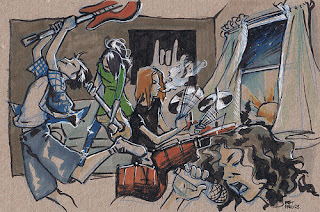 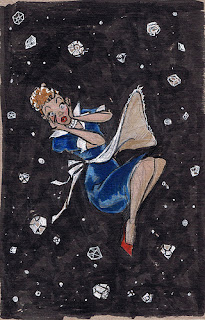 The theme for this week was an illustration of a song. We each drew a few and tried to guess what each others were. Was pretty fun. Realized I need to listen to more music. 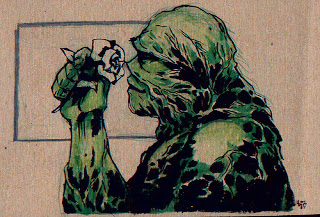 Swamp thing, taking a moment to smell the flowers. 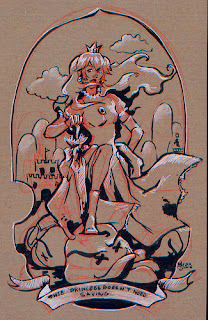 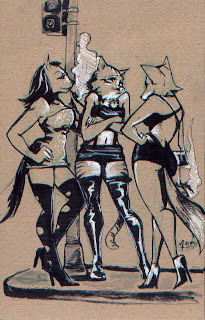 Theme was working animals. I took it literally. 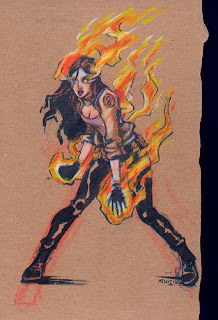 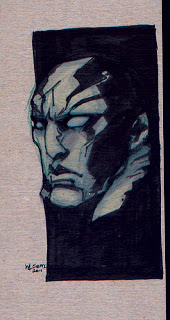 Abe Sapien
I updated both my Tumblr and Website today. Website got a face-lift and Tumblr some new(old) photos. I'll re-post this stuff to Tumblr tomorrow, but I think i will leave photos on Tumblr. It's faster :)!
Stay tuned, more to come.
Posted by Meldt at 12:34 AM 8 comments: 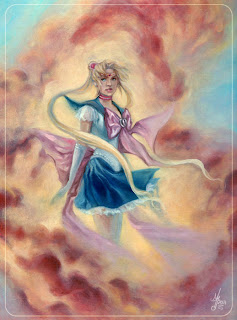 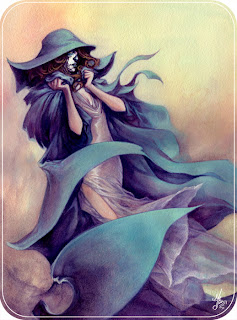 Those updated previously were terrible quality. Also, got a little obsessed with re-editing my portfolio using colour balance layers in photoshop. To think, a few more tweeks years ago and i might have been a tad more happy with the outcome then. 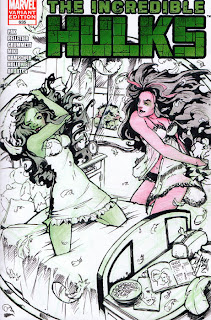 Also a pamcake cover. Before most cons, comic retailers sell blank covers so you can bring them to conventions and get artists to do covers. We just bought a bunch and drew on them ourselves.

I am alive. I have had no Internet for a month, thus no updates.

I should have internet soon, so stay tuned.

Apparently when Internet is not around, one is more productive.
Also expect to see a new, simpler website layout!

A few pictures from my trip to Edmonton.

The more blogs I read, the more I think that art blogs can be a great source of inspiration for others as well as showcasing your work. I spent a good day or two gaining over Charlie bowater's blog.
She is a fairly frequent poster (and extremely awesome artist) and manages to post not only progress and experiments of her own work, but also photography, inspiration snippets and talks about others blogs. While this isn't an uncommon thing, it sometimes one person that for some reason kind of takes it to a level that makes you think "that makes sense!" Most posts are short and sweet, with just an image and some text, or just text, but it gets straight to the point. She's also really cool about answering people's questions about anything, which is pretty cool.

Those who know me, know i can't do the talking/typing that well. I've been known to write in a way that either makes brains explode or lul even an insomniac to sleep. Look at my first posts on experimenting to know what I mean :p. I think that's what probably the reason I haven't updated the past few months. It was more about documenting the journey (which involved alot of writing) and less about the final product or post. It's ok sometimes, but I got a little caught up with details and it bored even me. I'm sorry. It happens! ><

Also, website updates are irritating....especially when you need to seriously redesign it. So for now it stays the way it is, and I'll be sticking to blogging for now.

'm going to attempt to try to be one of fewer words and more art. I'll probably post more photos as well....I heart my DSLR very much and feel it needs some more love.


A bunch of art from my Tuesday drawing group from the last month and a bit.

KP as the punisher. He's so bad, he don't need guns! Done on one of the blank con-cover punisher comics.

Captain America as the face of Levis....

Think the theme for this was super villians and fast food....

Play on move titles....Superbad....I had nothing that night.

Doc Doom was the theme. He's emotional when he reads Pretty Women.

Future posts will probably be shorter as Im all caught up with art updates.

Expect photos from the west coast over the next week!

Drawings from my drawing group.....waiting for the drawings from the last month and a bit though.

So heres a small update. I've been painting and drawing fairly regularly lately and will probably be posting more in the near future.

Originally I started this in order to have something to auction off for Japan relief earlier this year. I got busy with work, and didn't have any time until recently to finish it. My dehumidifier which, turns out if left on, makes water mixable oils not set properly. The end result is a tacky surface which took a month to dry (normally takes a little over a week). Overall I'm happy with it...she looks a little to North american though.

1 of 3 paintings I've wanted to do since February of this year. This wad my attempt to get something similar in effect to Eric Fortunes work. He waters down acrylics to the constancy of watercolors and does endless layers to get some really beautiful effects. He does his work on large sheets of arches watercolor paper...probably 300lb cold press or higher as I was getting a lot of rippling with the 140lb rough paper. It took me about a week to finish.

I realized that I used to paint in a slightly similar fashion ( watering down the acrylic to do glazing vs using mediums to do layers), but never that many layers. Allows you to get some really interesting colours when you glaze this way though.

2 more of these to-go. I really love painting sugar skulls....something about them are beautiful to me....more so on pinups. It seems like every tattoo parlor I walk by now has at least a sugar skull tattoo image or painting in the window ( i noticed a few in a shop on queen in the fashion district).

Also, planning a weekly project to get this newish obsession out of my system. I plan on doing a tarot card deck with sugar skulls as the theme.
It's a bought time I started a weekly project. It'll keep me busy and out of trouble....and posting more often here of course. Probably start in a week, so stay tuned!

Well thats something for now....I hope to get some of my more comic-e and marker stuff up soon....waiting for scans.

Been side tracked by a fee new projects. Hope to post a few by the end of the week!